Children’s aprons are really one of the most used tools in our classroom, together with the mats!! We use them every time we work on art, science, or practical life activities that require protecting our clothes.

So I though it would be a good idea to share with you my very favourite DIY Montessori apron out there. It is from Sew liberated  (photo below) 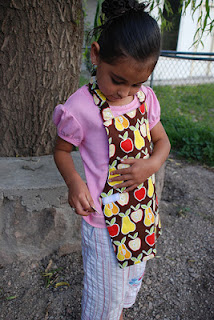 The main characteristic of this apron (apart from the cuteness factor!) is that it is designed in a way that allows the children to put it on and fasten it by themselves, without adult help.

Posted by Silvina at 2:09 PM No comments:

Email ThisBlogThis!Share to TwitterShare to FacebookShare to Pinterest
Labels: 3-6, materials

We have been using the Melissa and Doug Pattern blocks for years now, and we love them! But any good quality pattern block set will prove to be a very versatile tool for learning.

This material is not specifically a Montessori one, but it certainly shares a lot of the Montessorian "spirit". My six year old loves it, and he has moved away from the pre-made puzzles he cherished at 4, to create designs of his own.

He calls them "my art project", and since they are non-permanent by nature, we take pictures of them before restoring the material. Here is one example: 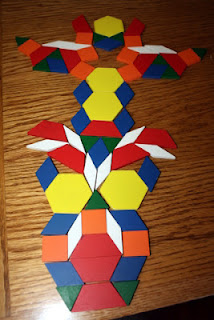 I also use it for my 4 year old (and the 2 year old tags along) as a means to learn the name of the shapes and the colours.

Posted by Silvina at 2:14 PM No comments:

Creating your own stories (with some grammar practice)

I found a great activity for practicing the concepts of these three parts of speech, which could be done after presenting the concepts and symbols for article - adjective - noun. It combines grammar with the joy of story telling and imagination.


Introduce the baskets to the child(ren). Encourage him (them) to write any nouns they can think of in the strips of paper belonging to the noun basket, being careful not to repeat any.

Do likewise with the adjectives.

When the articles strips need to be done, let them struggle with the task of coming with no repetitions and then remind them (if they do not bring it up by themselves) that we only have three pronouns in English and they will have to be repeated.

Children will then take turns to take one strip from each basket and make a noun phrase with it, which should be then copied on the index card. Some will be quite striking or non-sensical, but it adds to the joy of making them fit in a cohesive story.

Proceed until every index card is completed.

Shuffle the cards and pick 3 or 4. Explain to the children that you are going to make up a story with them The only rule is that you should use all the cards you picked in it, in the order you got them.

When you are done, ask a child to make its own story.
Posted by Silvina at 2:20 PM No comments: